Another title by Olga Slavnikova has been published in the famous Gallimard series Du Monde Entier: her novella cycle LOVE IN THE 7TH COMPARTMENT.

The book is available for proof reading in full English.

„I am sure that thousands of boys and girls will follow her, breahtless with delight.“ SERGEY LUKYANENKO

„In her outstanding magical story about Vasilisa, she manages to create a completely new, fascinating and original fantasy for children.“ ALEKSEI PEKHOV

„Natalia Sherba’s energy and passion have completely transferred to the text. The rich imagination and lively immediacy of the author is a definite plus for this kind of fantasy.“ H.L. OLDIE

The English translation of Grigori Kanovich’s novel DEVILSPEL has been published by Noir Press/ UK.

The novel is set during the tragic few weeks in June-July 1941, when the German army in a sudden attack defeated the Red Army and within a few days occupied Lithuania. Kanovich limits the spatial horizon of his novel to a small isolated village deep in the Lithuanian heartland. The village is too insignificant for the Germans to maintain their presence there, and its residents are left to their own devices. Slowly and painstakingly, Kanovich investigates the spiritual depths of the characters, simple shtetl Jews and Lithuanian peasants, exposing their moral strengths and weaknesses.

As in his previous novel SHTETL ROMANCE this Lithuanian author who is writing in Russian, is exploring the fundamental and universal ethical conflict between good and evil, which transcends the limits of concrete space and time.

The agency is happy to announce a new representation within its fantasy portfolio: G. Akella is the in-game user name of Georgi Smorodinski. Akella has been an avid gamer for two decades now.

REALM OF ARKON is Akella’s debut series with an extraordinary success on US amazon.com. English version available for proof reading.

A new update arrives to an ultra-popular online game. Now the level of immersion experienced by players in their gaming capsules has made virtual reality indistinguishable from the real world. But every gamer’s dream becomes a nightmare for Roman Kozhevnikov after he gets confined to Arkon against his will. And not just to Arkon, but to its deadliest zone – Demon Grounds. Roman becomes an immortal wanderer in an enormous alien world. And it’s not just about survival, it is about revenge.

This year you will find Wiedling Literary Agency located at the Russian stand in hall 5.0.
Looking forward to meeting with you.

Ivanov is at home in different genres but all of his books are explicitly plot driven, which is why almost all of them have become movies. 11 novels and 7 non-fiction books by him are now available with a total circulation of over 1.5 million. 5 books have been filmed, 5 more are currently being filmed. His span ranges from fantastical-historical over mystical horror to contemporary suspense.

Martinovich‘s dystopian travelogue NIGHT goes beyond a mere parable on the social-political conditions of this last dictatorship in the heart of Europe. For on his journey through the desert land, the intrepid Knizhnik can see the world step by step differently than before, when he, like all others, closed his eyes out of fear, stupidity and habit and believed in propaganda and rumors

„In fact, Martinovich is trying to do for Belarus what Gabrielle Garcia Marquez has done before. He brought the village of Makondo into world literature. And in it, as if in a nutshell, all Colombia, and even all of Latin America, with its mystical thin- king, the belief in God and at the same time the dead, and endless military coups.“ BELARUSSKI ZHURNAL

With his WORLD OF ARKON series G. Akella has made it into amazon’s top 100 author’s rank. English version available for proof reading.

Every gamer’s dream becomes a nightmare for Roman Kozhevnikov after he gets confined to Arkon against his will. And not just to Arkon, but to its deadliest zone–Demon Grounds. Playing, or rather living as his character Krian, it’s not just about survival for Roman. He longs to exact revenge for his banishment to the virtual world where the sensation of pain has reached one hundred percent… 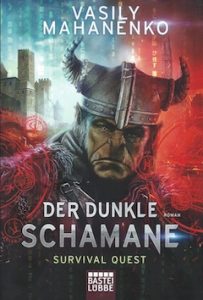 The 2nd volume of Vasily Mahanenko’s cyber punk fantasy series THE WAY OF THE SHAMAN has been published by Lübbe/ Germany.