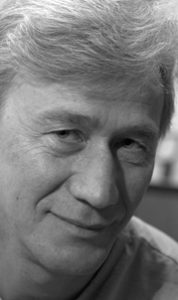 We are very sorry to announce that author Aleksei Slapovski recently died at the age of 65.

The very first license contract concluded by Thomas Wiedling for a novel by a Russian author – even before the agency was officially founded – happened in 1998: ANKETA – THE QUESTIONNAIRE by Aleksei Slapovski.

More novels in translation followed. Just recently the agency was able to conclude a deal for a feature film based on a theatre play by Slapovski.

Also Slapovski was one of those authors who did not hesitate to speak out against Putin’s aggressive war in Ukraine. When it became too dangerous to openly publish critical texts in Russia about this war and about Putin, Slapovski started to use a pen name.

The trusting relationship with Slapovski had developed into a friendship over the course of 25 years. We have lost an author who never lost his sense of humor. I have lost a friend.