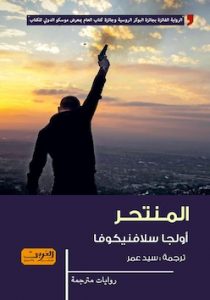 Ermakov is responsible for climate damage, terror attacks, car accidents, fires and, illness. He needs to end his life voluntarily for the good of mankind. The alpha field will be eradicated only if he commits suicide. The state will make him a posthumous hero, complete with proper compensation as well. Ermakov does not want to, however. The hero in Olga Slavnikova’s novel THE LIGHTHEAD has had too much of a taste of individual freedom and determining his own way of life to be able to sacrifice himself for the reasons of a state. Ermakov is put under pressure and under obvious surveil- lance, the door to his apartment smeared with slogans, his landlady gives him notice, his company demotes him and the mob demonstrates on the street against the man refusing to grant salvation from evil.

With sound, witty punch lines and razor sharp analysis, Slavnikova’s quasi-literary experiment puts archetypal Russian qualities under the conditions of globalisation to the test: individualism versus communism, self versus society, the willingness to make sacrifices versus egoism. What is the Russian soul still worth today?