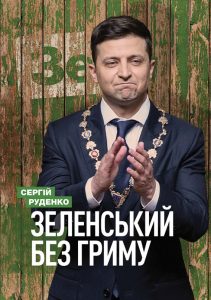 the political biography about the Ukrainian President by a Ukrainian journalist

The book ZELENSKYY WITHOUT MAKE-UP by Sergii Rudenko tells the story of Zelenskyy’s rise to power as honestly and openly as possible and without any retouching. A book about Zelenskyy’s triumph in 2019, but also about his numerous defeats in the political Olympus.The story of a man who, without any political experience or relevant knowledge, promised the Ukrainians to change their state. A man trusted by 13.5 million voters. A person who must understand: great trust is also a great responsibility. The man who accepted the challenge of Vladimir Putin, becoming the head of the Ukrainian state in this difficult period.