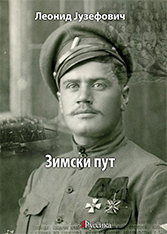 Serbian language edition has been published by Russika

In 2022 we will have the 100th anniversary of the last battle of the Russian Revolution in winter 1922 when General Anatoly Pepelyaev hastens to the aid of the Yakuts in Vladivostok with a force of volunteers. Pepelyaev – a poet and seeker of truth, a fighter for self-determination and the freedom of men – sees in supporting the Yakuts a last chance to defend his own political ideals.

The full English translation by Marian Schwartz is available for proof reading. 7 languages sold so far.