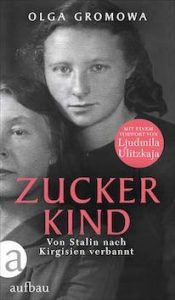 What is it like to be a „public enemy“ from one day to the next, to be exposed to Stalin‘s repressions – the Great Terror? Stella Nudolskaja experienced it with her parents in the Soviet Union of the 1930s.

Decades later Olga Gromova, active librarian and editor-in-chief of specialized journal, meets her neighbour, Stella, who gradually tells her her personal story. Olga Gromova turned it into a strong and tender book, in which the reader accompanies the girl through all her impassable life.

A story which was originally aimed at 12-16 year old readers, is now no longer perceived as „young adult“, but has become part of the great Russian literature.

“Sugar Child is the documentary fact of a miracle – the education of a human personality under inhuman conditions.“ Sergei Lebedev

SUGAR CHILD by Olga Gromova comes with a preface by Lyudmila Ulitskaya.